The tyre tap consists in landing your rear tyre right onto a square edge, pinching the rear tyre to boost your compression just before you eject yourself backwards with 180° of rotation to land in the general direction of the move. 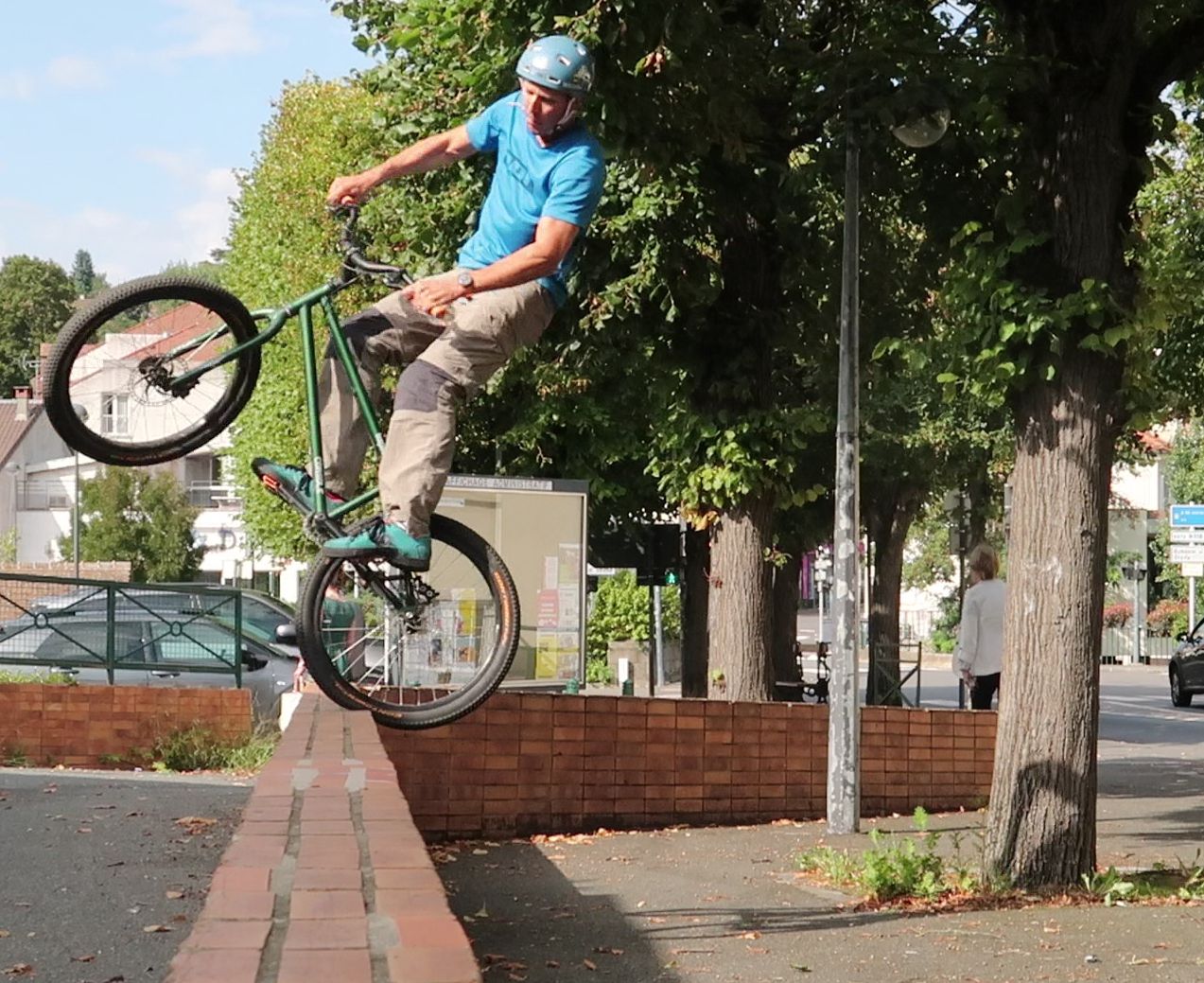 Pinch that tyre before you back off in rotation.

The simplest and safest way to learn the tyre tap is to start off alongside a small kerb to get your marks.
Before you get started on that move, you should first know how to pedal kick, preferably, with a 90° turn (back foot side). You should first align the bike comfortably along the kerb's edge (about half a foot from the lip), with your front foot on the outside of the kerb (drop side).

When ready, with both brakes locked, lean over the handlebars and turn your front wheel slightly towards the gap to preload your rotation before a kick.
Then initiate the rotation with your torso (back foot side, to face the kerb) and push-up on the front wheel as you swing the bars to the kerb side. As you've build enough spin, release the rear brake and perform a small pedal kick to bounce the bike up and let it spin to follow your shoulders.
In the air, swing the bike to face the kerb and aim your rear tyre at the edge to pinch it perpendicular to the kerb's lip (that's your first 90°) As the rear tyre hits the kerb (the actual tyre tap), maximize tyre compression and preload your extension by crouching before bouncing back.

Now you're ready to eject yourself backwards, but in order to rotate an extra 180° and complete the turn, pull further on the bars while trying to look back, over your shoulders. This should be a continuous move (in fact you should feel the bike spinning from the initial pedal kick throughout the tyre tap compression), ensuring you still spin as you eject yourself off the edge.

In mid-air, carry-on with your momentum and swing the bike away from the wall, forcing its rotation beyond your torso to face the general direction of the move. Ideally, by the time the rear wheel reaches the ground, you'll have completed the turn with the bike to land smoothly. Stretch your legs before touch-down so you can absorb the impact. 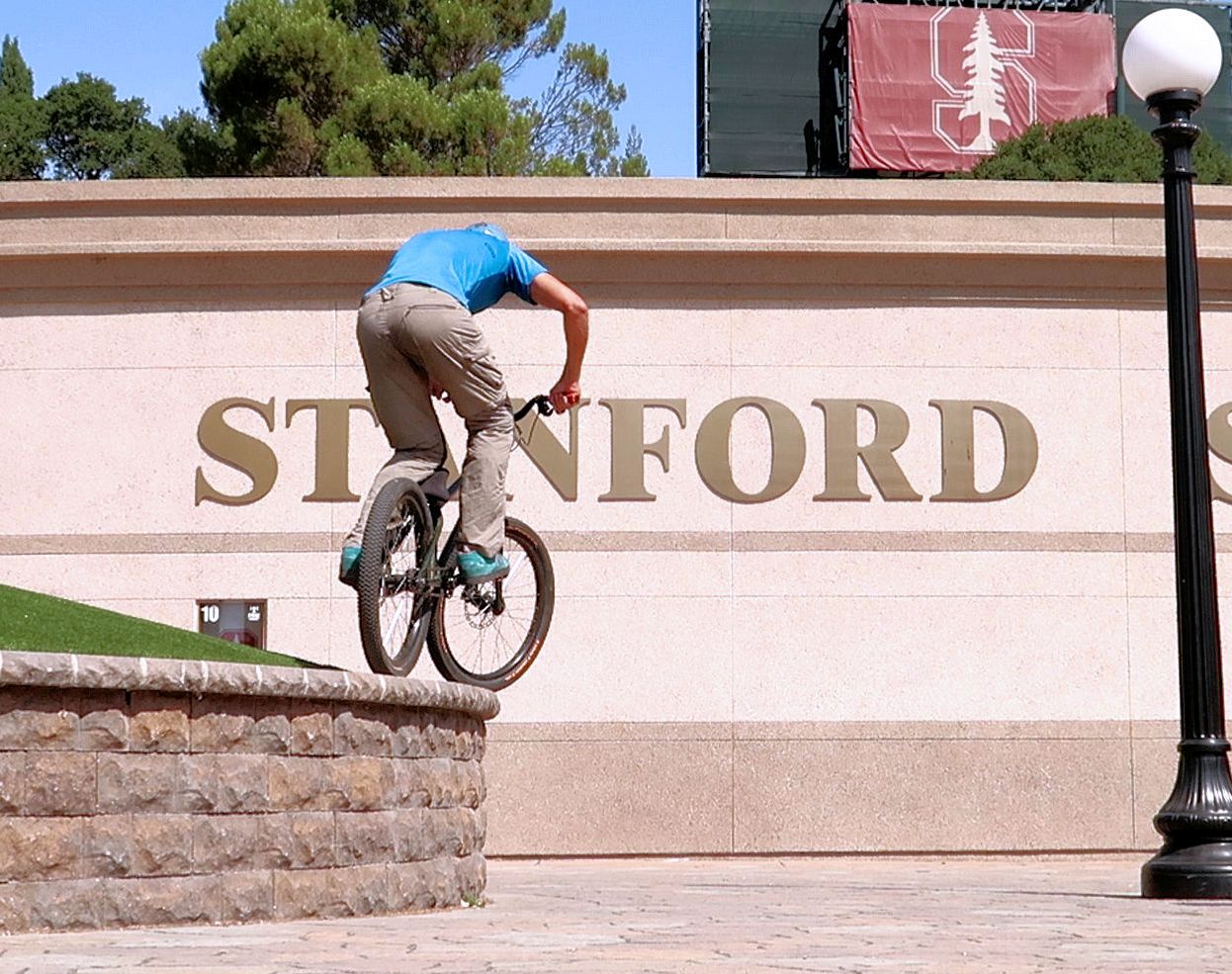 1° Both brakes locked, lean over the handlebars and turn your front wheel slightly towards the gap to preload your rotation before a kick. 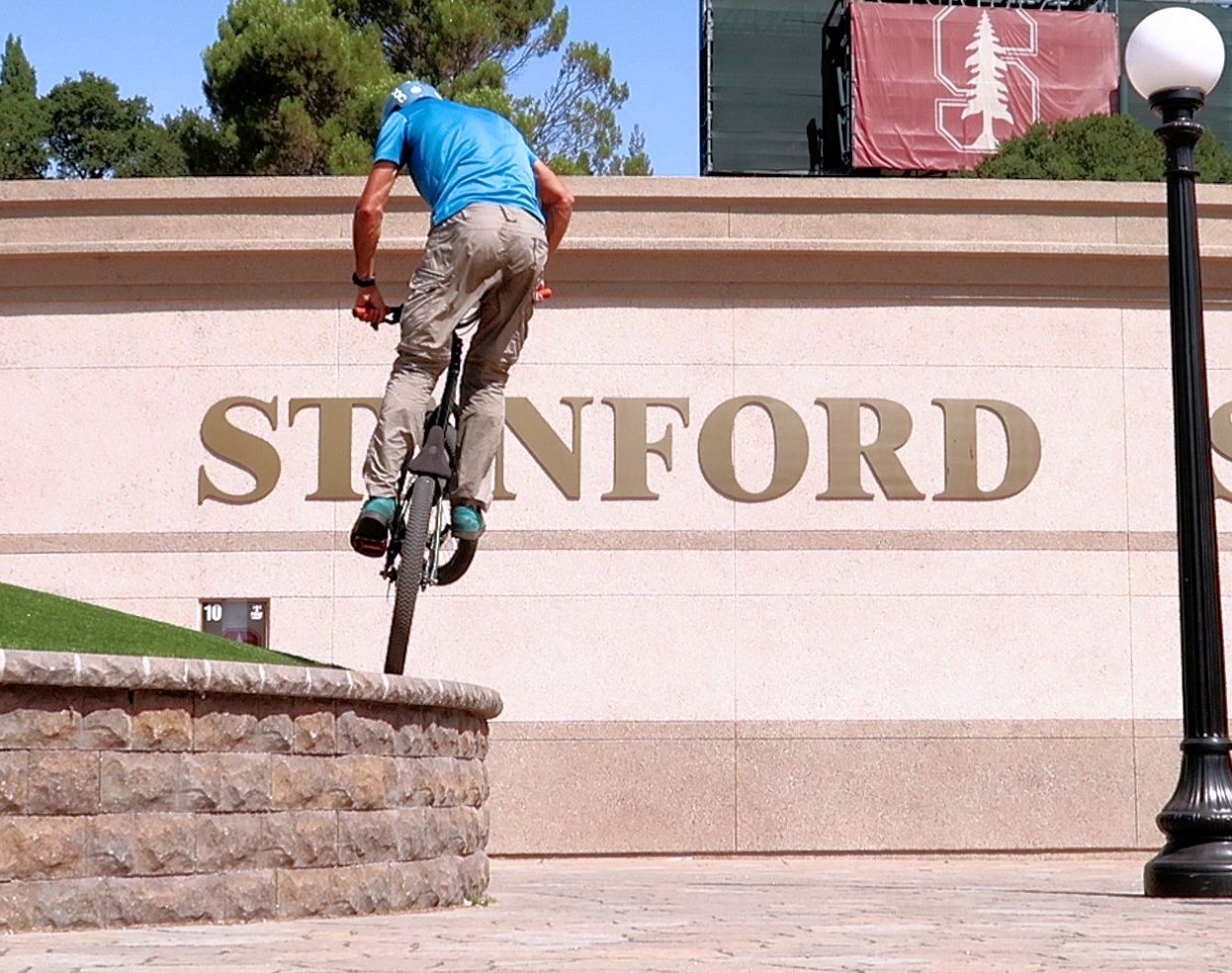 2° Release the rear brake, swing the bars to the other side while performing a small pedal kick to bounce the bike up and make it spin. 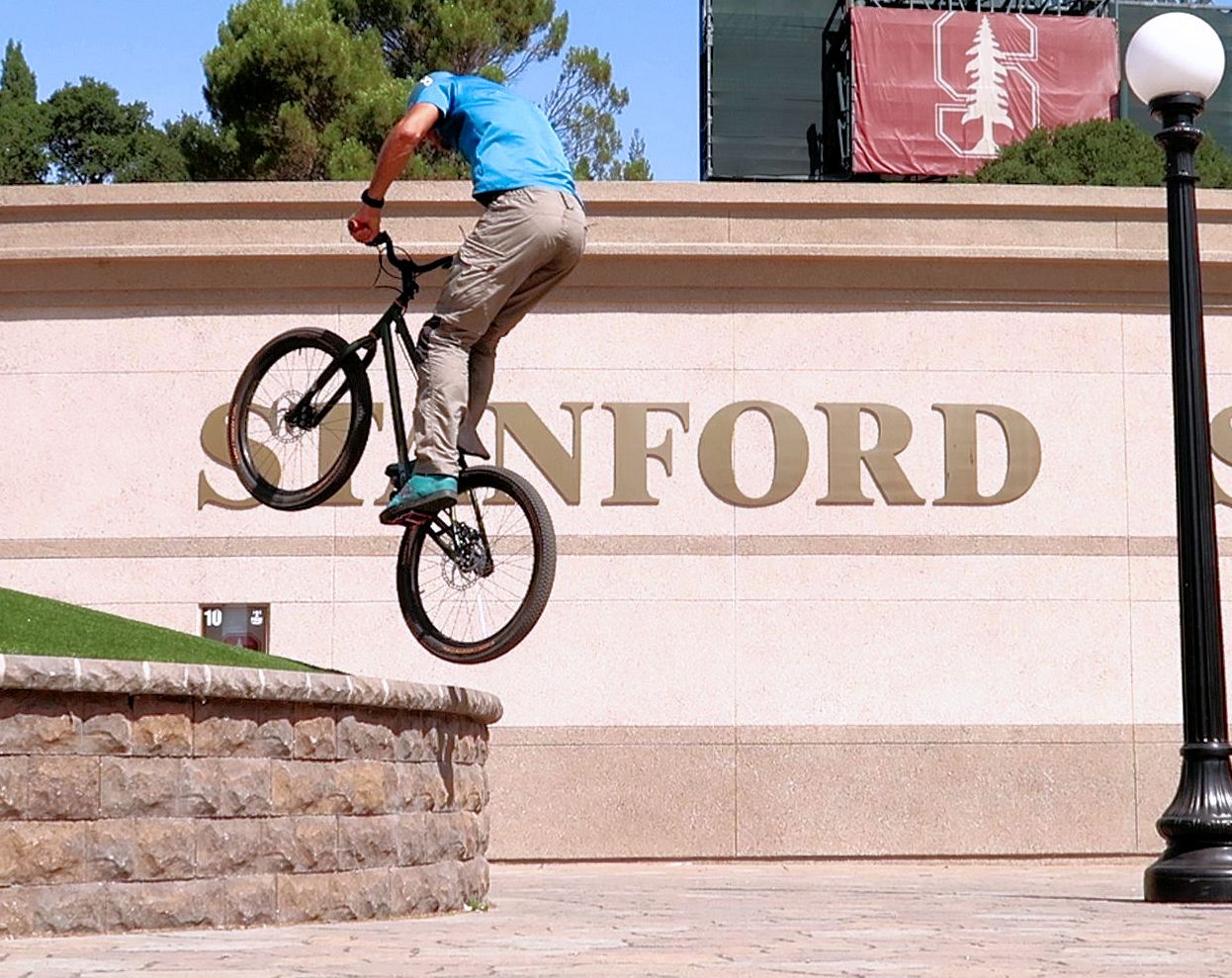 3° In the air, swing the bike to face the wall and aim your rear tyre at the edge to pinch it perpendicular to the wall's edge.

4° As the rear tyre hits the kerb (the actual tyre tap), crouch then bounce back, pulling further on the bars as if you were trying to look back. 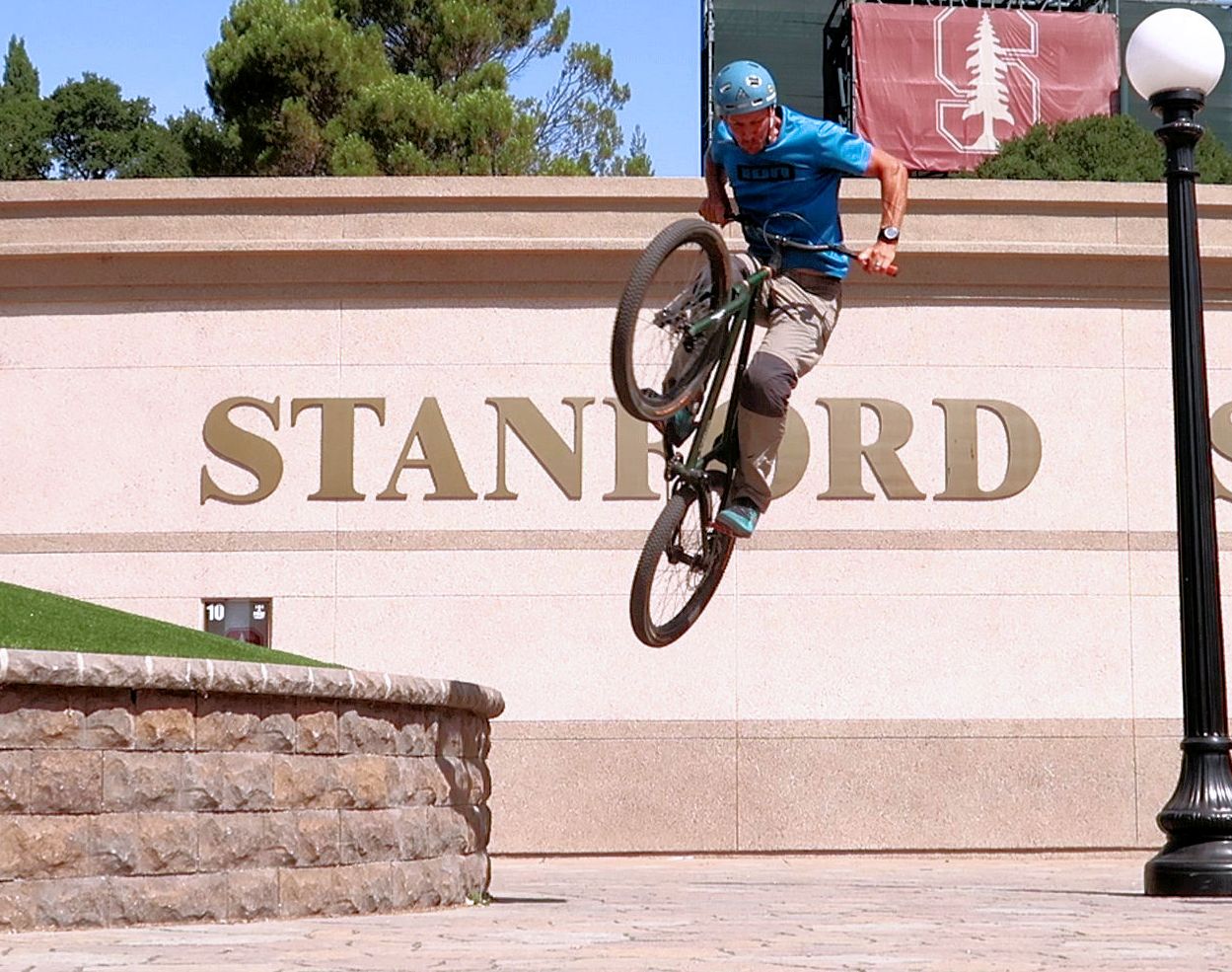 5° Ejecting yourself, carry-on with your momentum and re-align the bike with your torso to complete the turn. 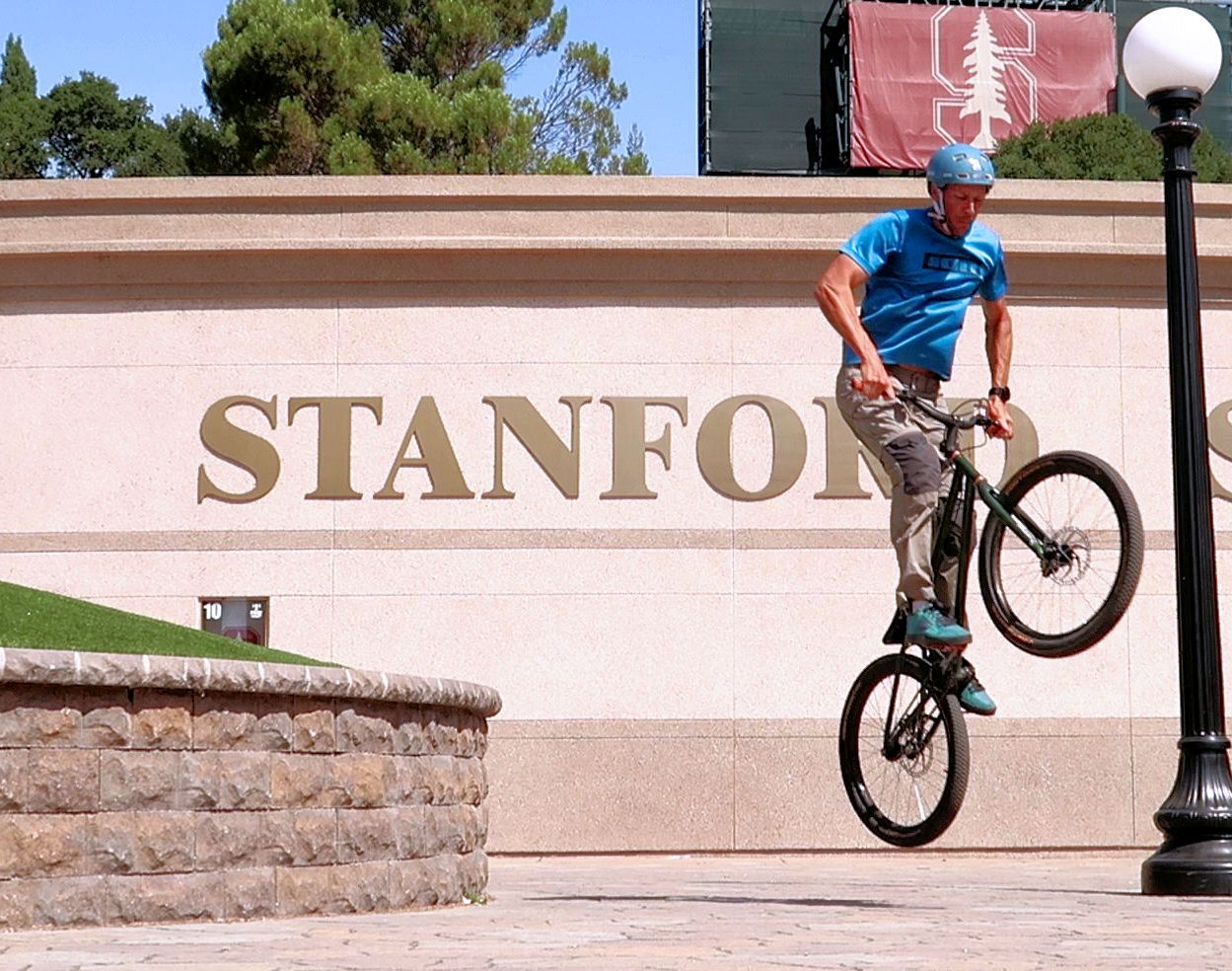 6° As in any drop-off technique, extend your legs and let the rear wheel drop first to damp the impact.

As you tap the rear tyre, keep your bum in swing and spin with your torso.

Body-wise, the whole 270° tyre tap should be a continuous move, with your shoulders driving the first 90° of turn to tyre-tap, then driving the remaining 180° as you eject yourself off the edge.

To maintain this spinning momentum throughout the actual 'tyre tap' when the bike tacks to the edge, keep your hips loose and swing you bum from your back-foot side to your front-foot side during the compression-rebound phase of pinching the rear tyre.

This will augment your rotational torque as you eject yourself in extension and drive the rotation further with a swirl of the torso (trying to look back over your shoulders).

Of course, the higher the drop, the more time you'll have to spin (but the riskier it gets if you don't spin properly or if you miss the edge). As a beginner, launching a 270° tyre tap off a very low kerb, you'll tend to hit the ground sideways.

360° tyre tap
Riding to the lip of a kerb, or straight to a staircase, you can speed up your tyre tap technique with a 180° bunny hop. Find your marks to take-off your 180° bunny hop (typically carving it back-foot side) and land it with your rear wheel right onto the lip of a small staircase (two or three steps are enough to begin with).

Land backwards with your rear brake locked but keep the whole rotation going as you pinch the tyre so you can complete the turn by ejecting yourself on your spinning momentum.
To maintain your spinning momentum during the tyre-tap, keep your hips swinging into the turn, your bum moving to your front-foot side as your shoulders go the opposite way (to back-foot side).

This subtle body language will boost your rotational torque and ensure you still have plenty of spinning momentum as you eject yourself in extension.
Complete the turn in mid-air and re-align the bike to face the general direction of the move before you land.
Because you'll go faster on this move, make sure you land straight to avoid a painful reception. If you feel a bit short of rotation, tucking and pulling the bike up will give you extra air-time to complete the rotation and land flat. 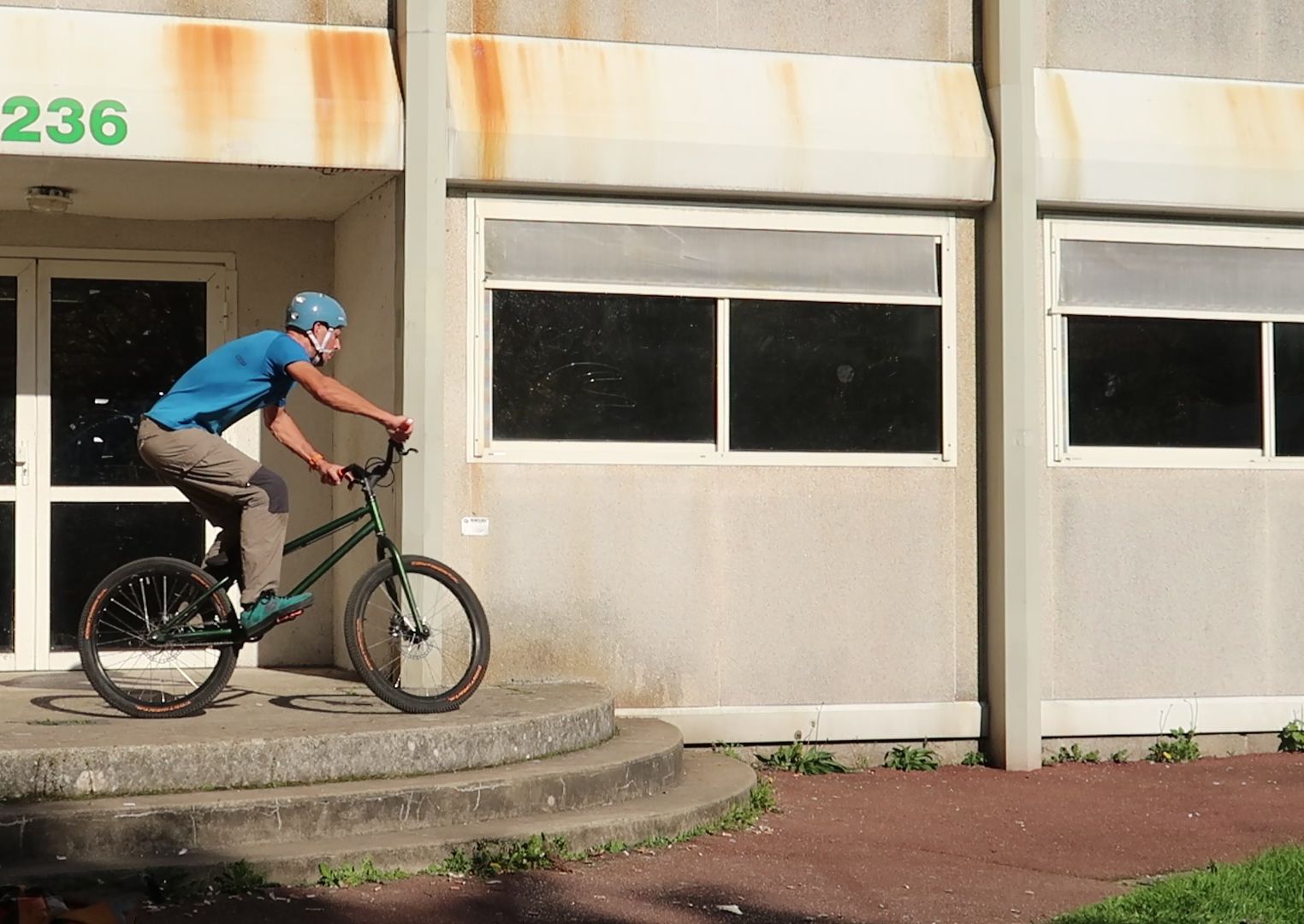 1° Timing is key, cruise at a comfortable speed to launch a 180° bunny hop. 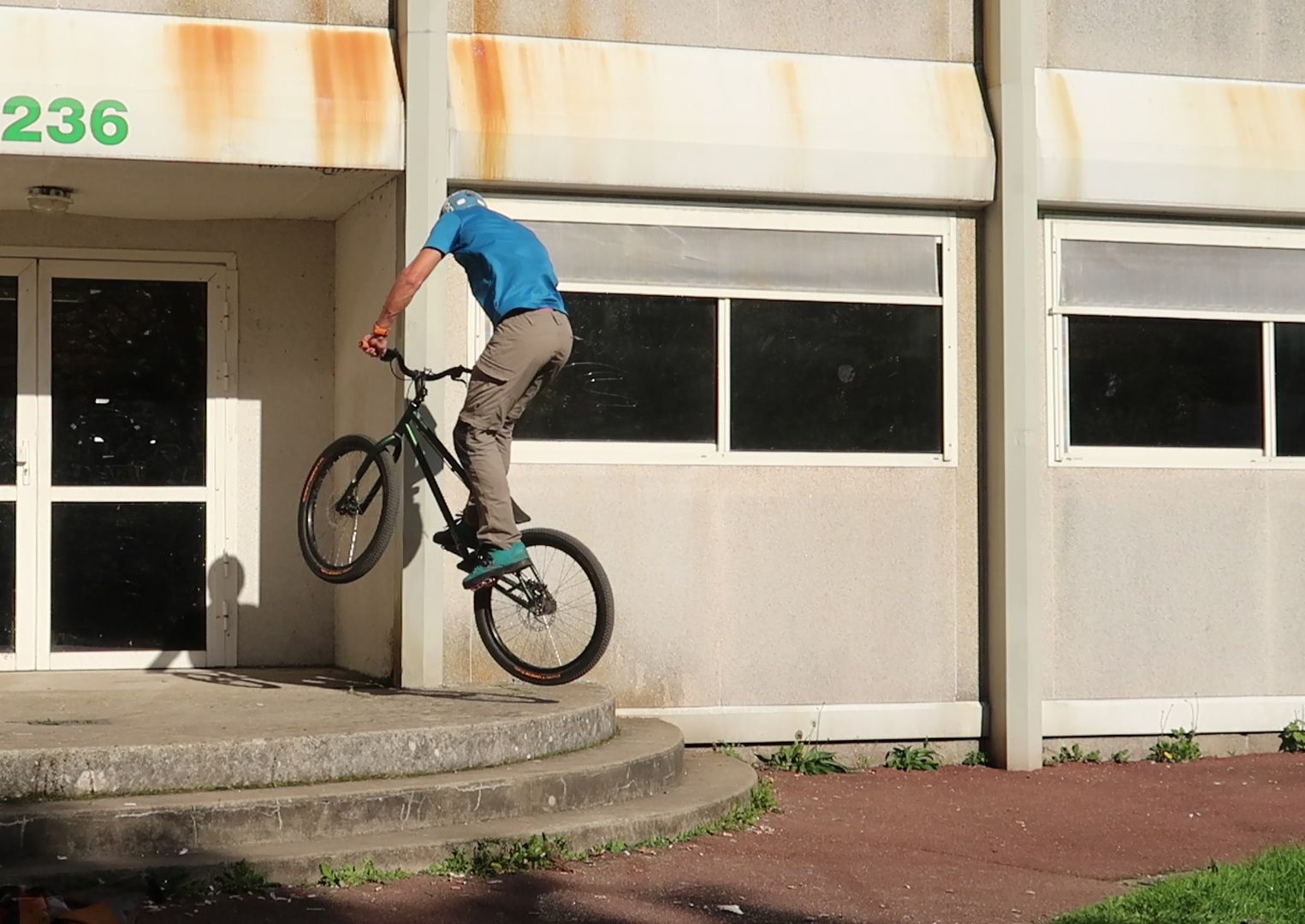 2° Aim to land your with your tyre right onto the edge (it will roll back and press against it). 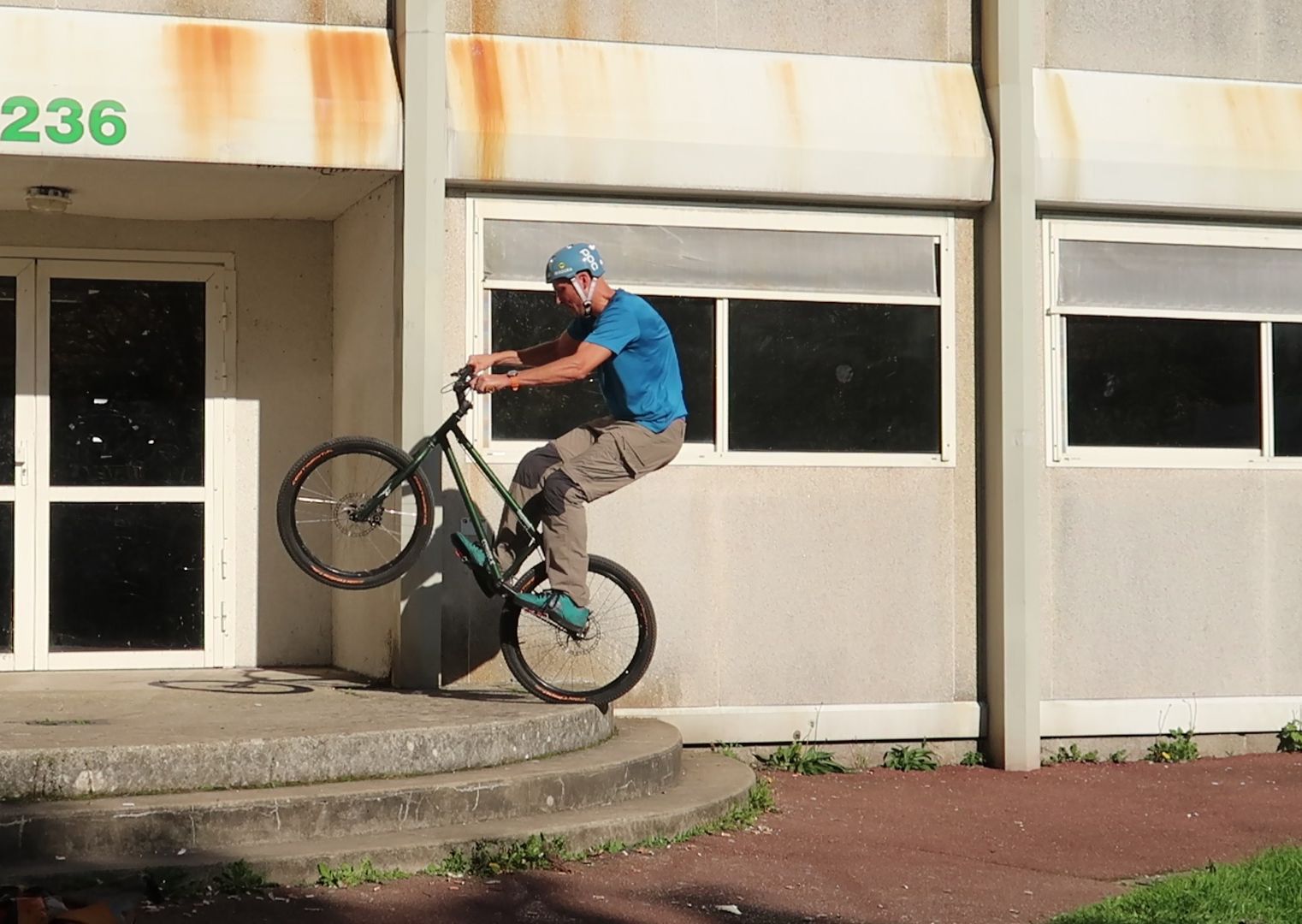 3° Land backwards with your rear brake locked, crouch to press your rear tyre onto the edge.

4° Eject yourself in extension and drive the rotation further with your torso, turning the handlebars.

5° Tyre rebound helps you pull the bike up. Swing it sideways to force its rotation beyond your shoulders. 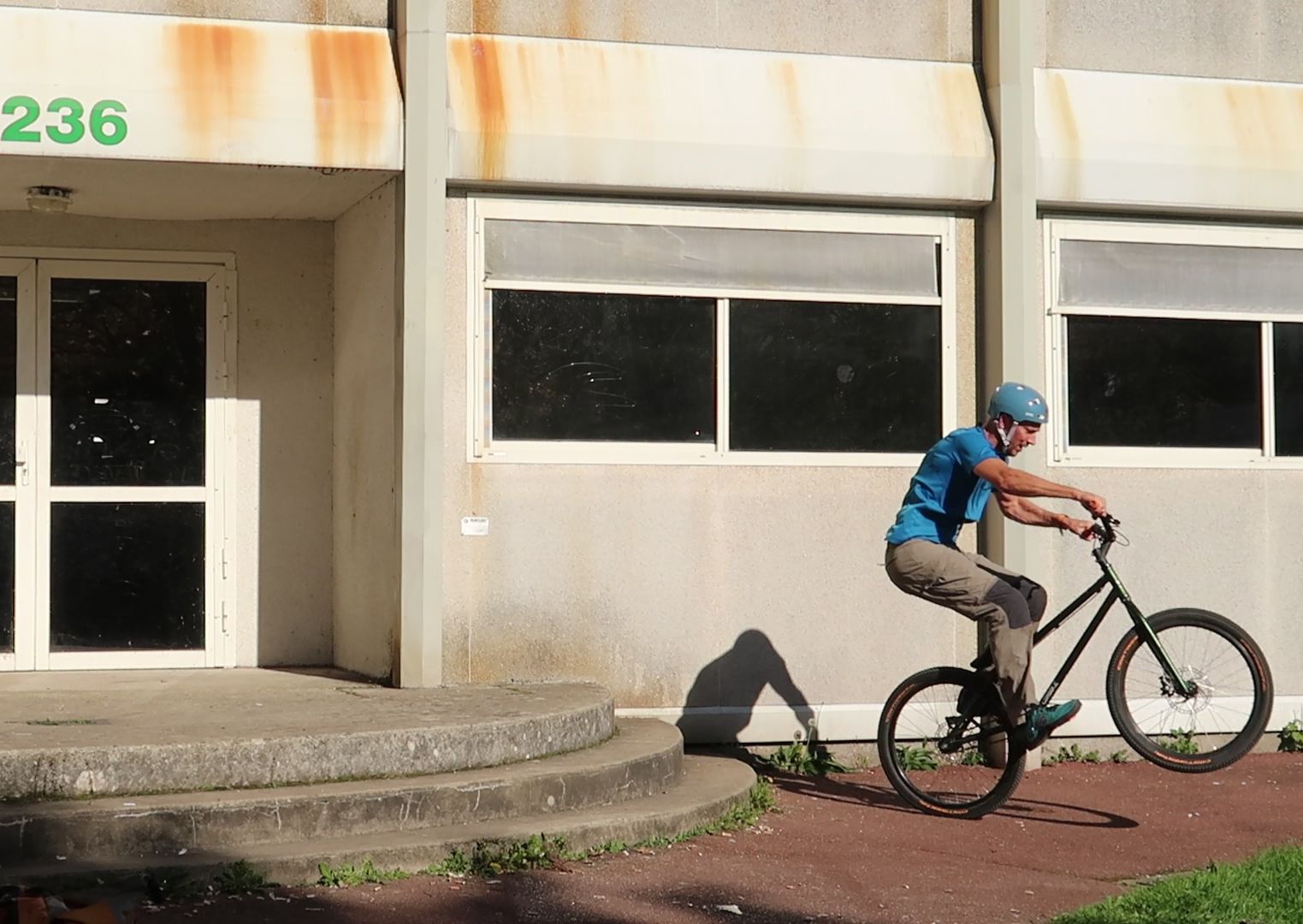 6° Drop the rear wheel before touch-down, then crouch progressively to damp the impact and ride away. 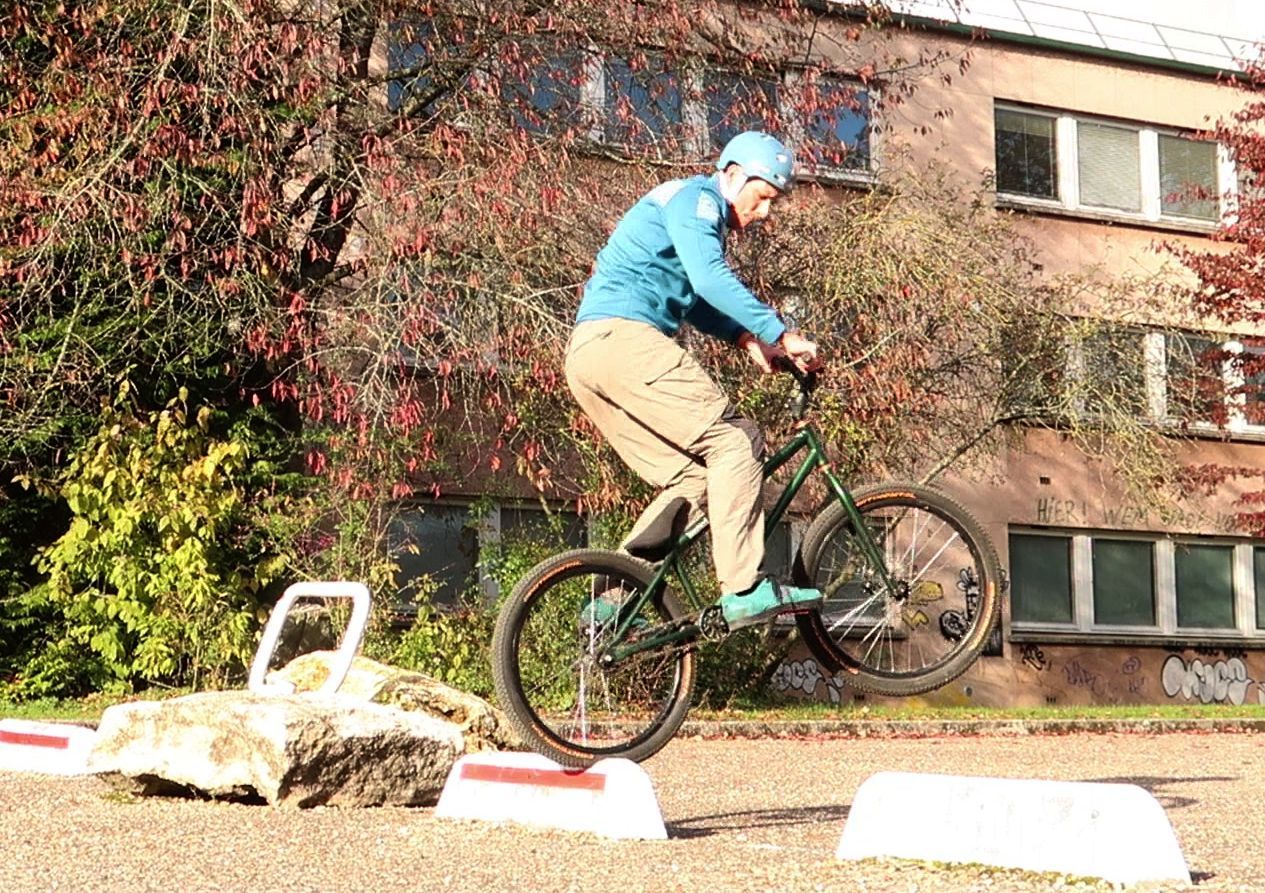 Landing a 180° bunny hop to tyre tap onto a thin edge.

Once you get the hang of regular 360° tyre taps, then you may want to launch them on top of thinner edges, for example landing a 180° bunny hop directly on top of a low rail or a small wall, before completing the turn with a tyre tap, sending you over to the other side.