Once you've figured out how to drop-off sideways with a front wheel pivot, it only takes a little bit more of commitment to pivot further and complete a full turn as you eject yourself away from a wall. 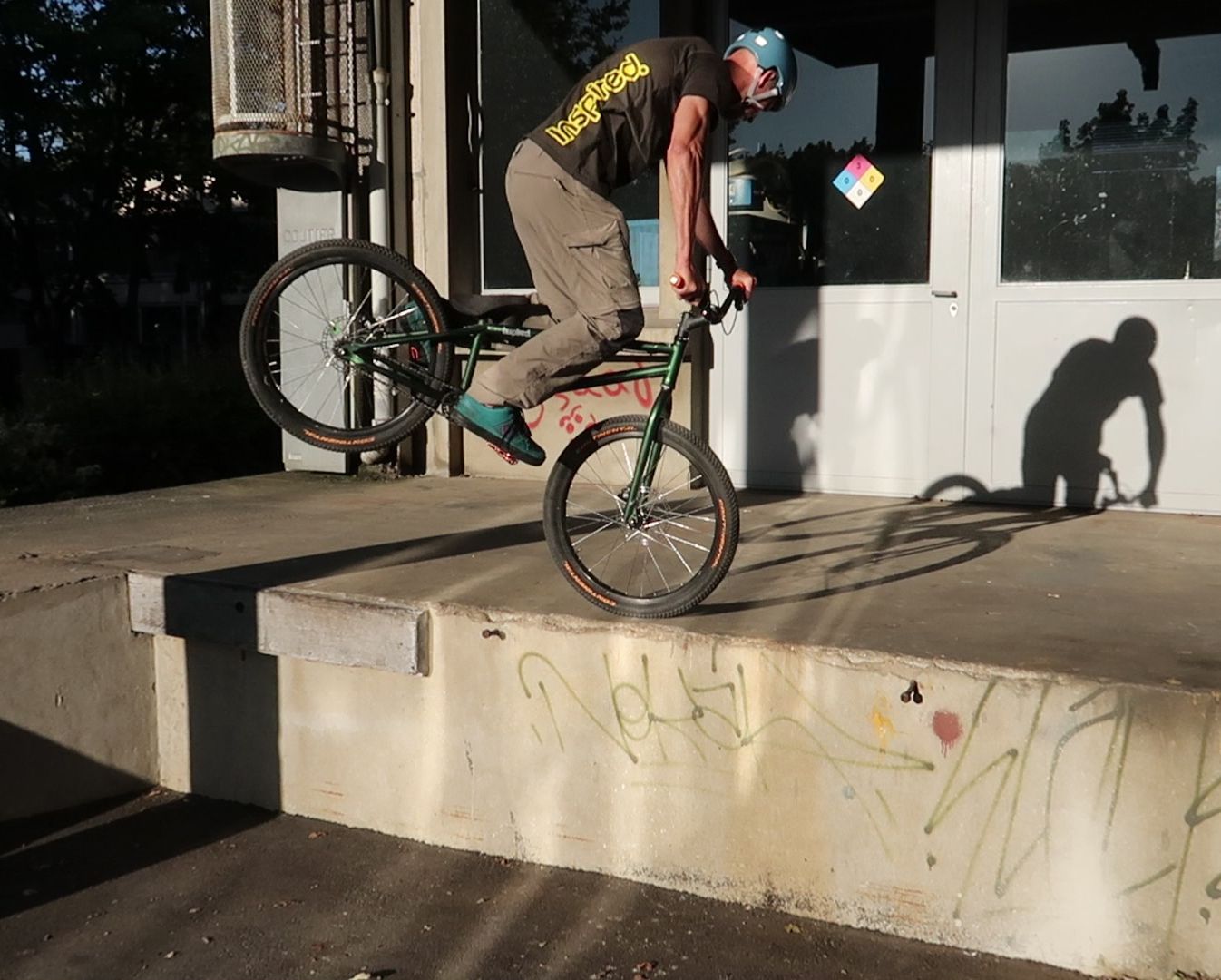 Keep the rear wheel up for as long as you can.

If you are confident about pivoting on the front wheel, you can push the endo side drop to 90° or more on the front wheel. Then, relying on your inertia and ejecting yourself away from the wall with a firm push-up, you'll be able to hop the front wheel off and complete the turn in mid-air to land at 180 or even 360 degrees from your initial position on the obstacle. This technique could be used to re-position yourself as you drop for interesting line combinations, dropping at 90° or 180° from your initial direction. But for the "Whow!" factor at demos, you can perform a 180° pivot on the front wheel, from facing a gap, to complete the full 360° as you drop off a high platform. 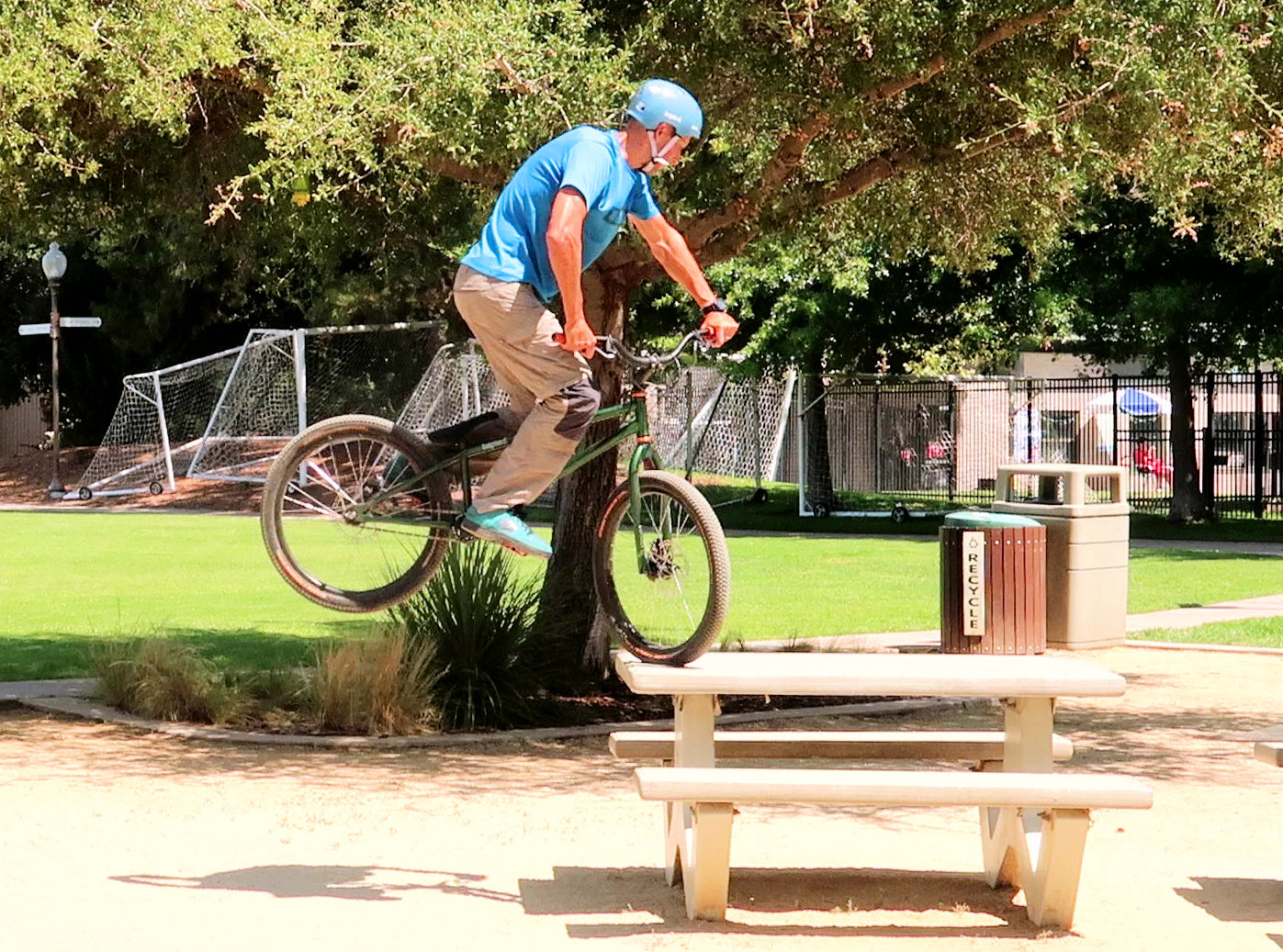 Swing your hips to initiate the endo and keep pivoting on the front wheel with your rear wheel well lifted. Maintain your shoulders over the bars. But when you have pivoted about 180 degrees and are ready to hop, perform a firm push up on the handlebars and shift your weight over the rear wheel.

The push-up together with a good swing of the handlebars away from the obstacle will help you spin the bike further. Once ejected from the obstacle, pull the bike further to your back foot side to follow the rotation of your shoulders and re-align the bike beneath you as you drop, rear wheel first.
Depending on how confident you are with your front wheel pivots, you can launch this move from a trackstand position or riding at a brisk walking pace. The full frontal 380° nose drop will be easier to complete at a faster pace, thanks to the extra momentum.

1° Riding at a walking pace, apply the front brake and turn to your back foot side, swinging your hips to your front foot side. 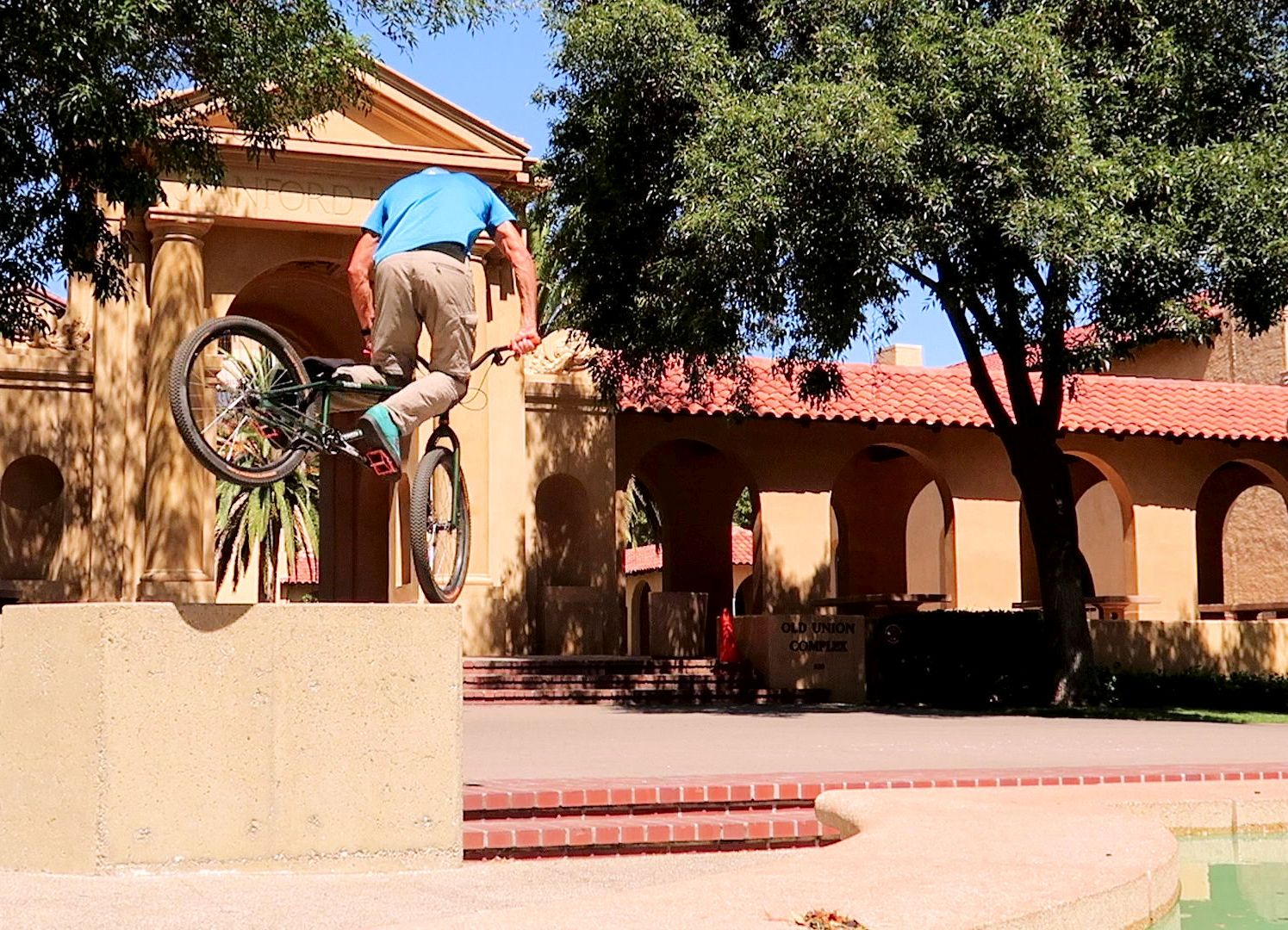 2° Keep pivoting on the front wheel with your rear wheel well lifted, shoulders over the handlebars, arms slightly flexed. 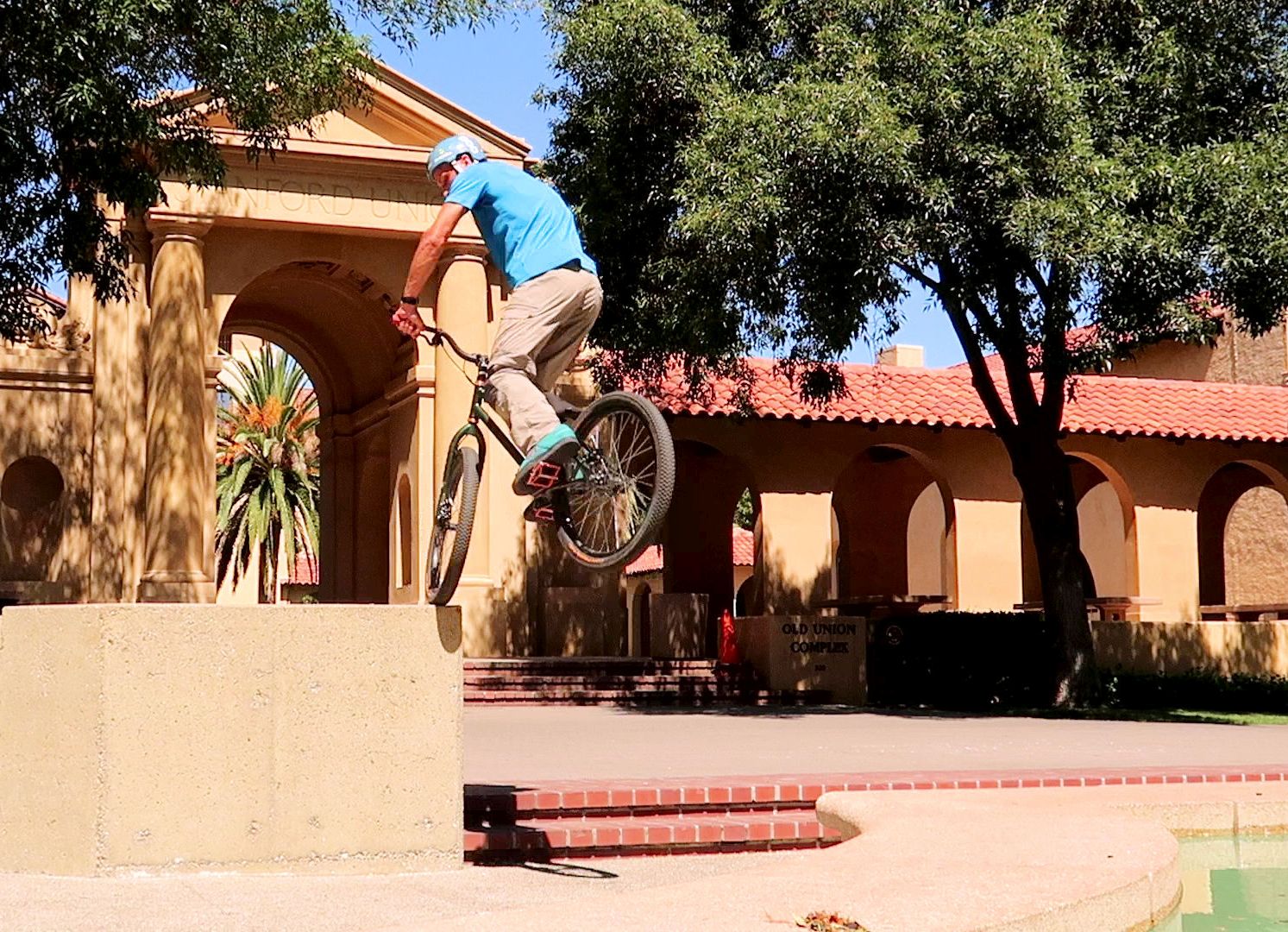 3° Once you have pivoted about 120°, perform a firm push-up on the handlebars and shift your weight over the rear wheel. 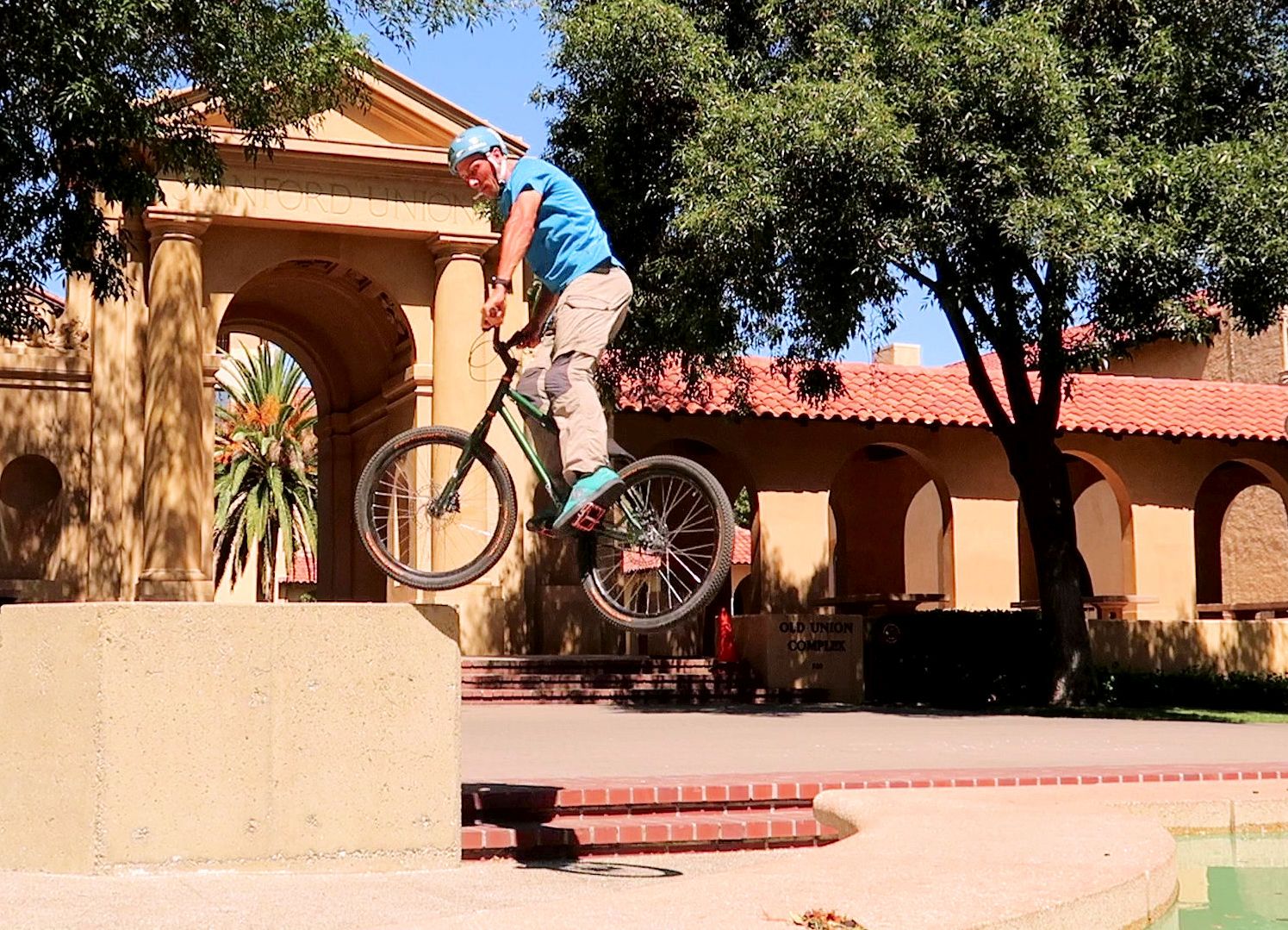 4° The push-up together with a good swing of the handlebars away from the obstacle will help you spin the bike further. 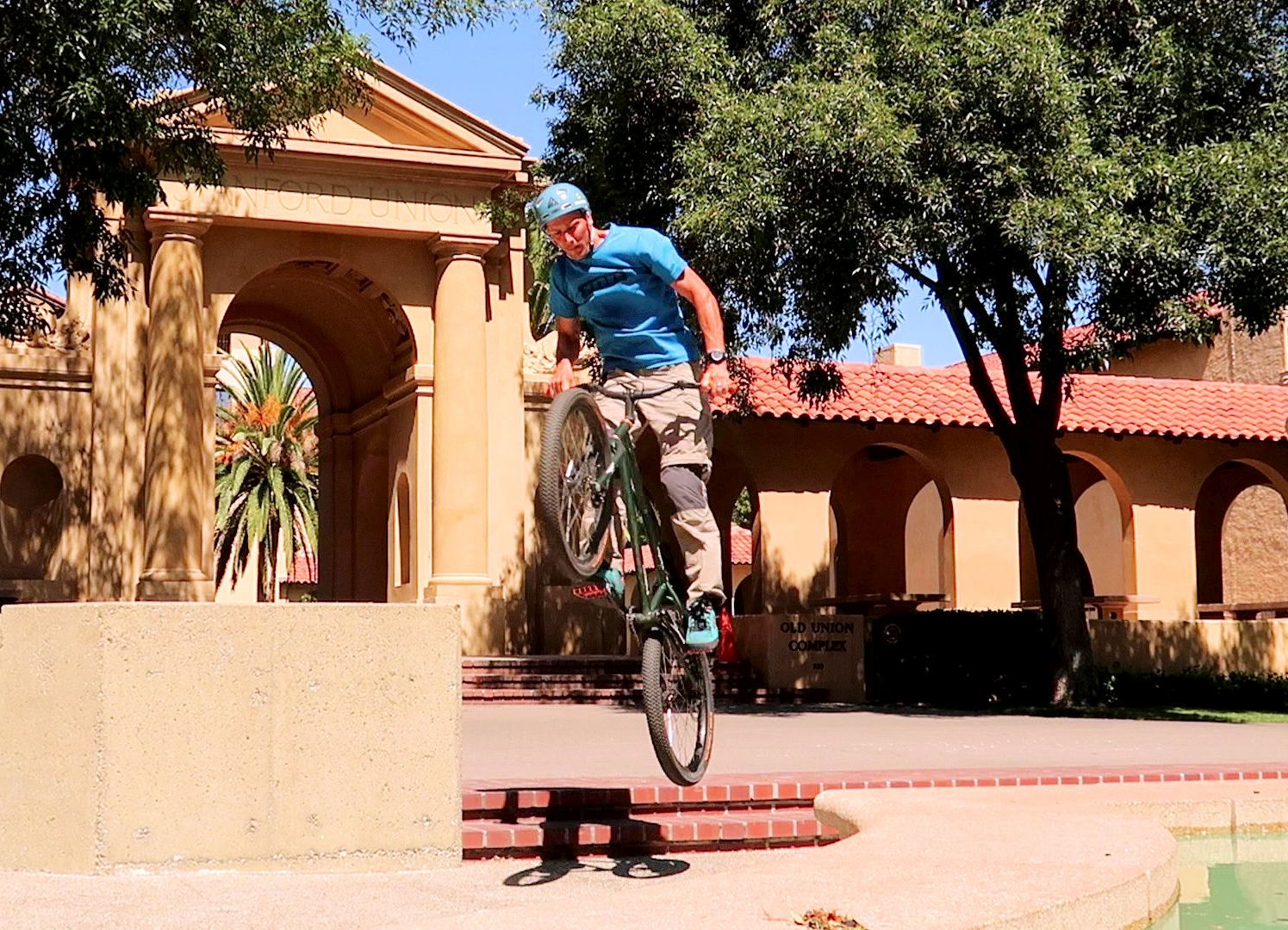 5° In the air, pull the bike further to follow the rotation of your shoulders and re-align it beneath you as you drop, rear wheel first. 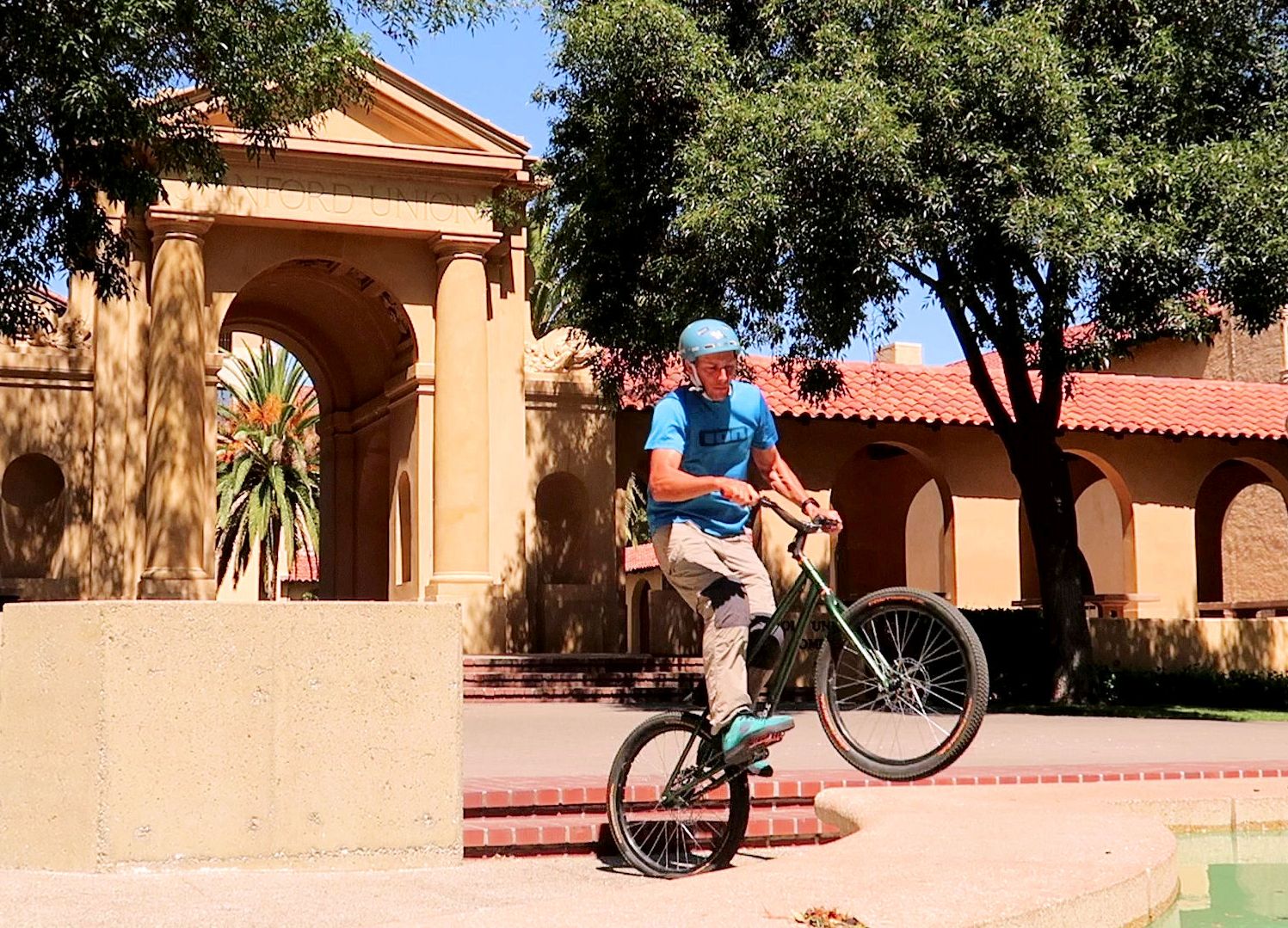 6° Keep your rear brake locked as the rear wheel touches down and crouch progressively to absorb the impact, then roll away.

As you pivot, keep your rear wheel up, so you can efficiently push on the front wheel to hop off the wall and add spin to the movement with a swing of the bars.

Lowering your rear wheel below the obstacle's height before the final push-up would make it harder to clear the front wheel (the front tyre gets hooked to the edge, a sure way to crash on your back).


180° landing fakie
If you decide to only pivot 180 degrees and then drop backwards, away from the obstacle, then you don't have to push as much on the handlebars. Instead, focus on keeping the bike straight during the tyre push-up away from the edge, to clear your front wheel without lowering as much the rear wheel before touch-down. Of course to stop the rotation at 180°, you'll want to put less emphasis on spin and perform the push up sooner.

The push-up clears the front wheel off the obstacle. Don't let the rear wheel drop as much as you would for a full 360° drop. You want to be able to hold the bike going fakie, and landing with the bike standing too vertical would make it difficult.


Landing backwards, don't touch the rear brake as it would throw you off balance on your back. Instead, backpedal a couple of pedal strokes as progressively as you can. Use your backward momentum and give a sharp swing in the bars (figure out your preferred side) to complete the turn, or terminate with a quick pedal kick to hop another 180°, landing in the general direction of the move. 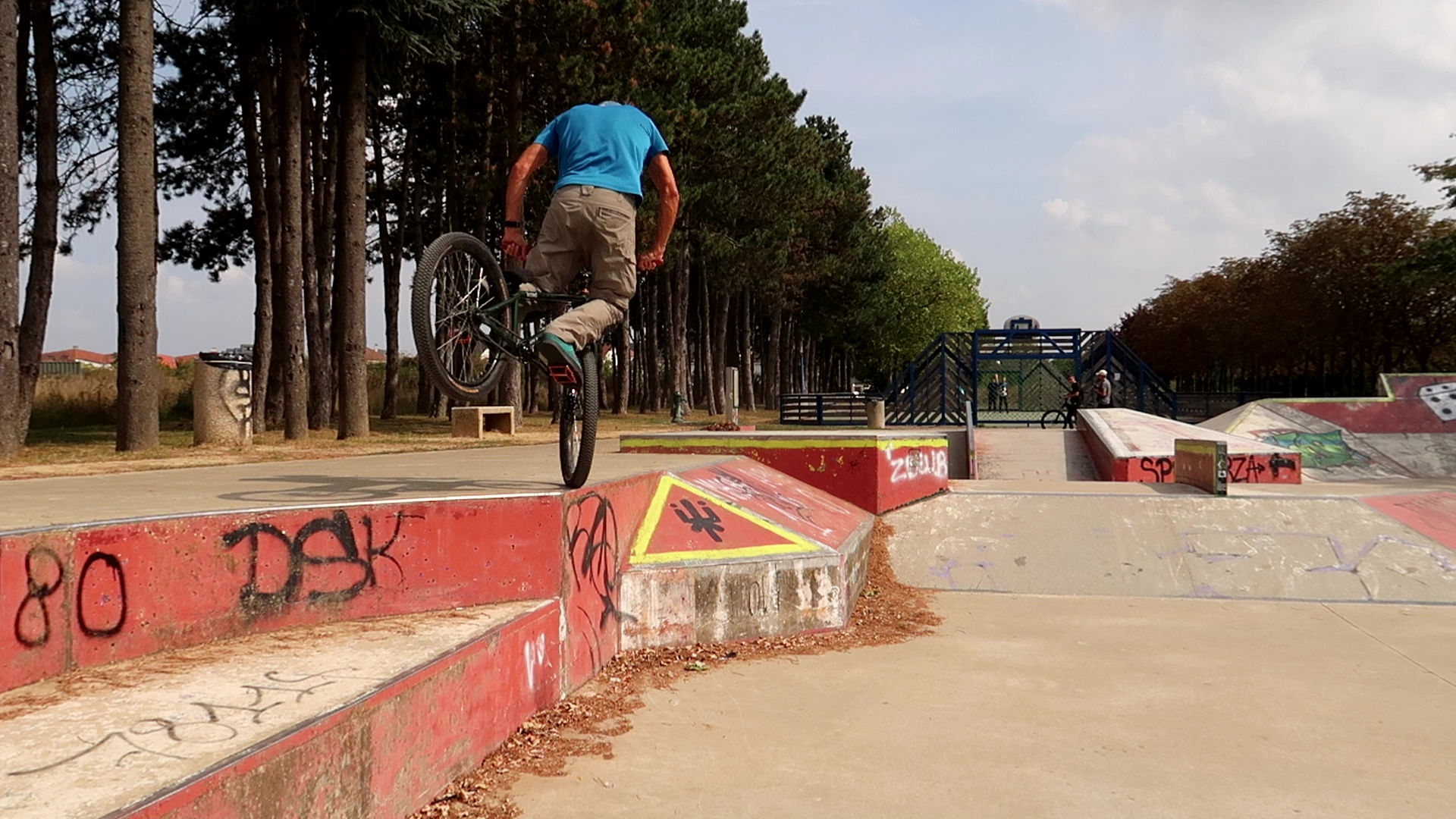 1° Swing your hips to initiate the endo and keep pivoting on the front wheel until you reach about 120° in rotation. 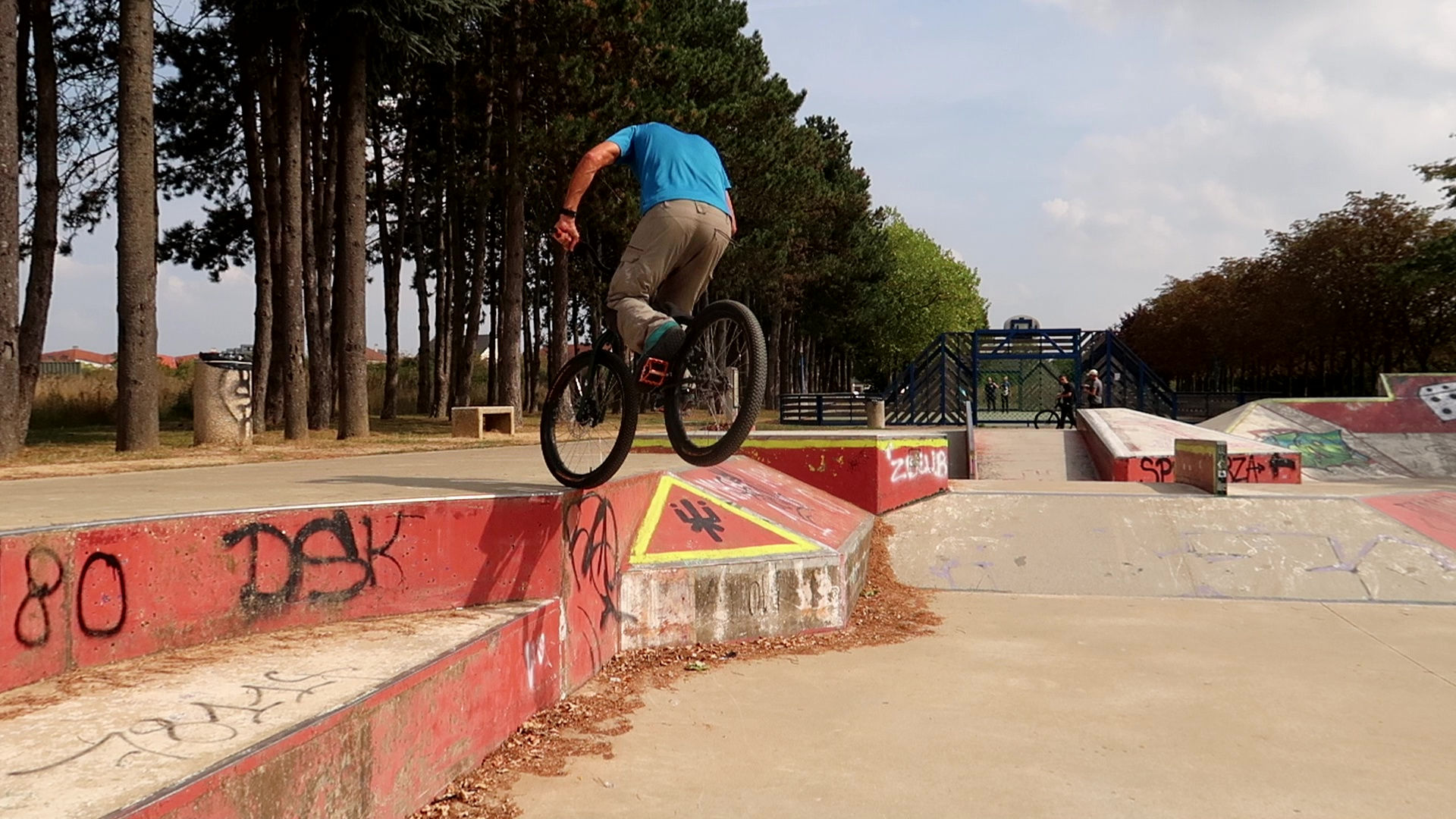 2° At about 120°, perform a firm push-up on the handlebars but stay centred over the bike to keep it straight. 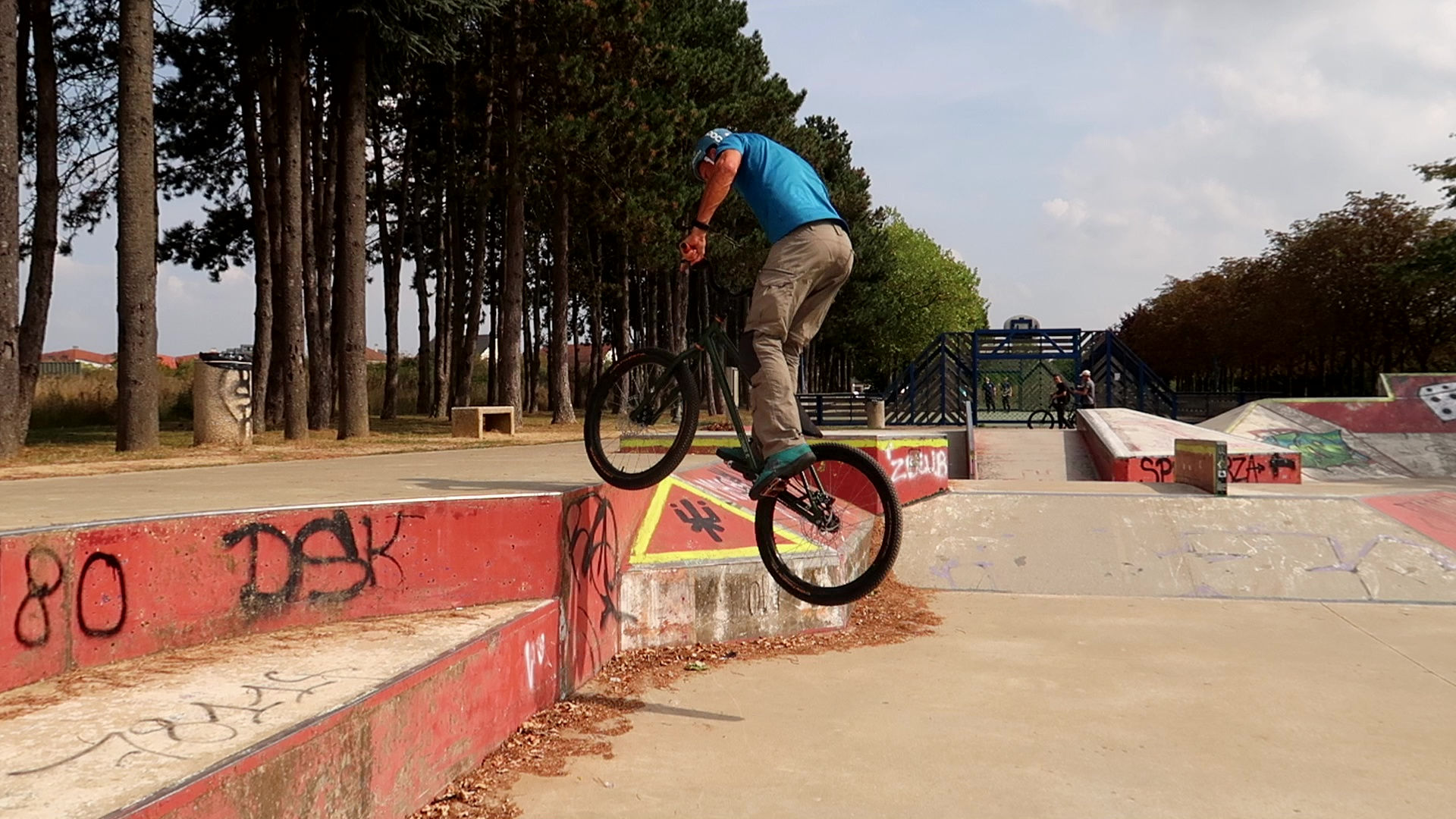 3° The push-up clears the front wheel off the obstacle, but don't let the rear wheel drop as much as you would for a full 360° drop. 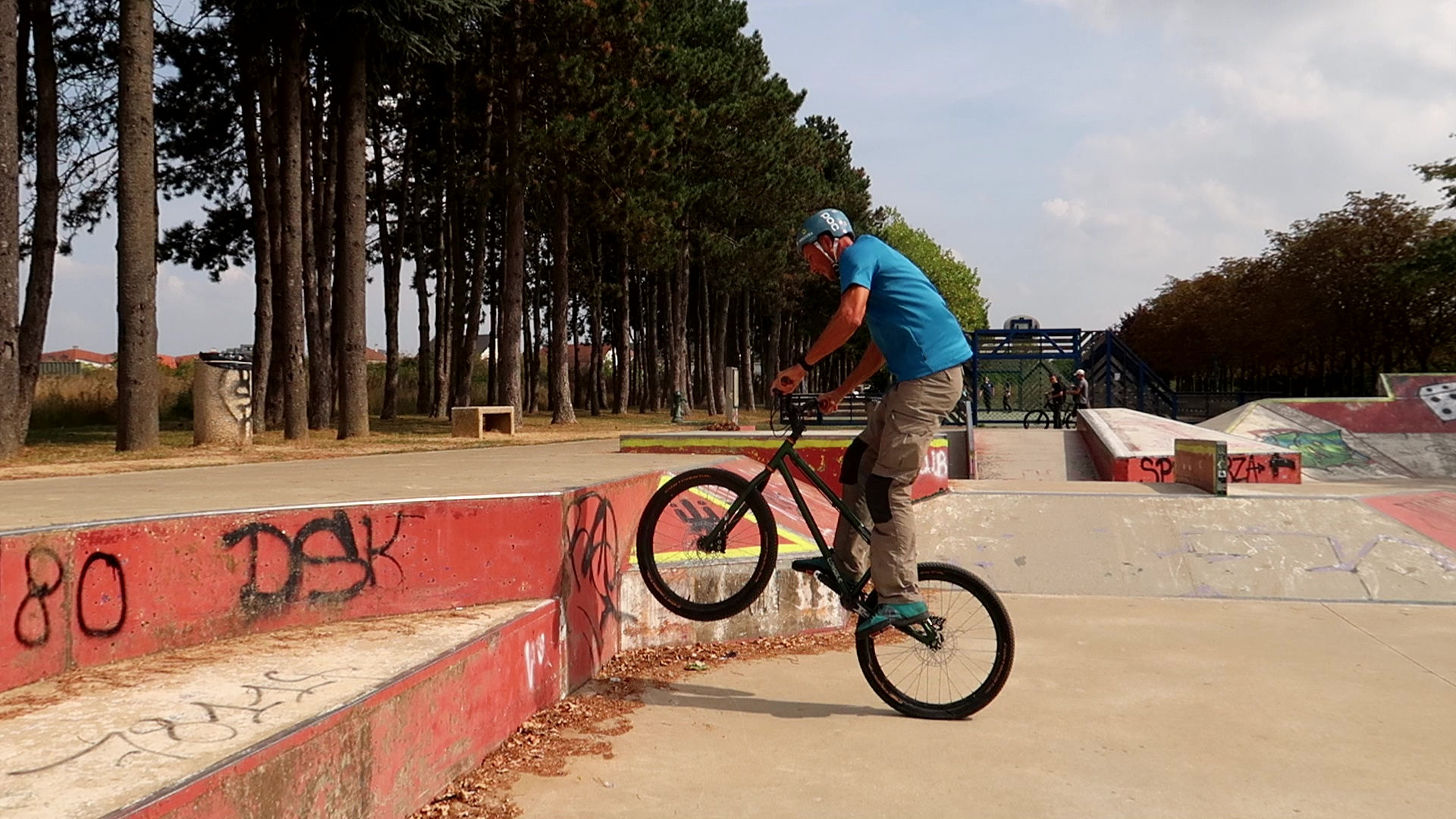 4° Release the brakes as you land, so the bike can roll back as the rear wheel touches down, regroup over the centre of the bike. 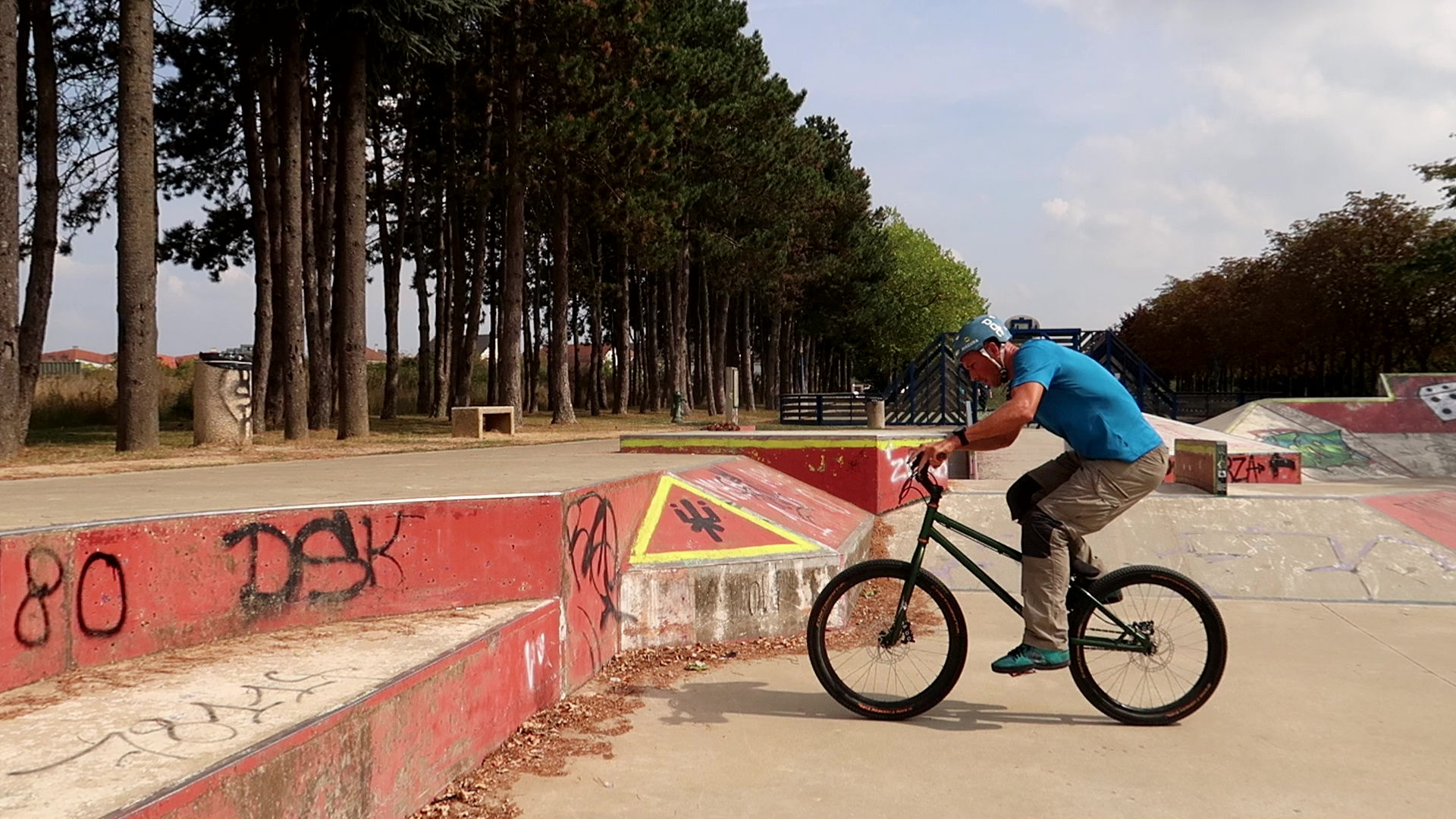 5° Crouch on the bike to absorb the impact while backpedalling as progressively as you can to keep your backward momentum. 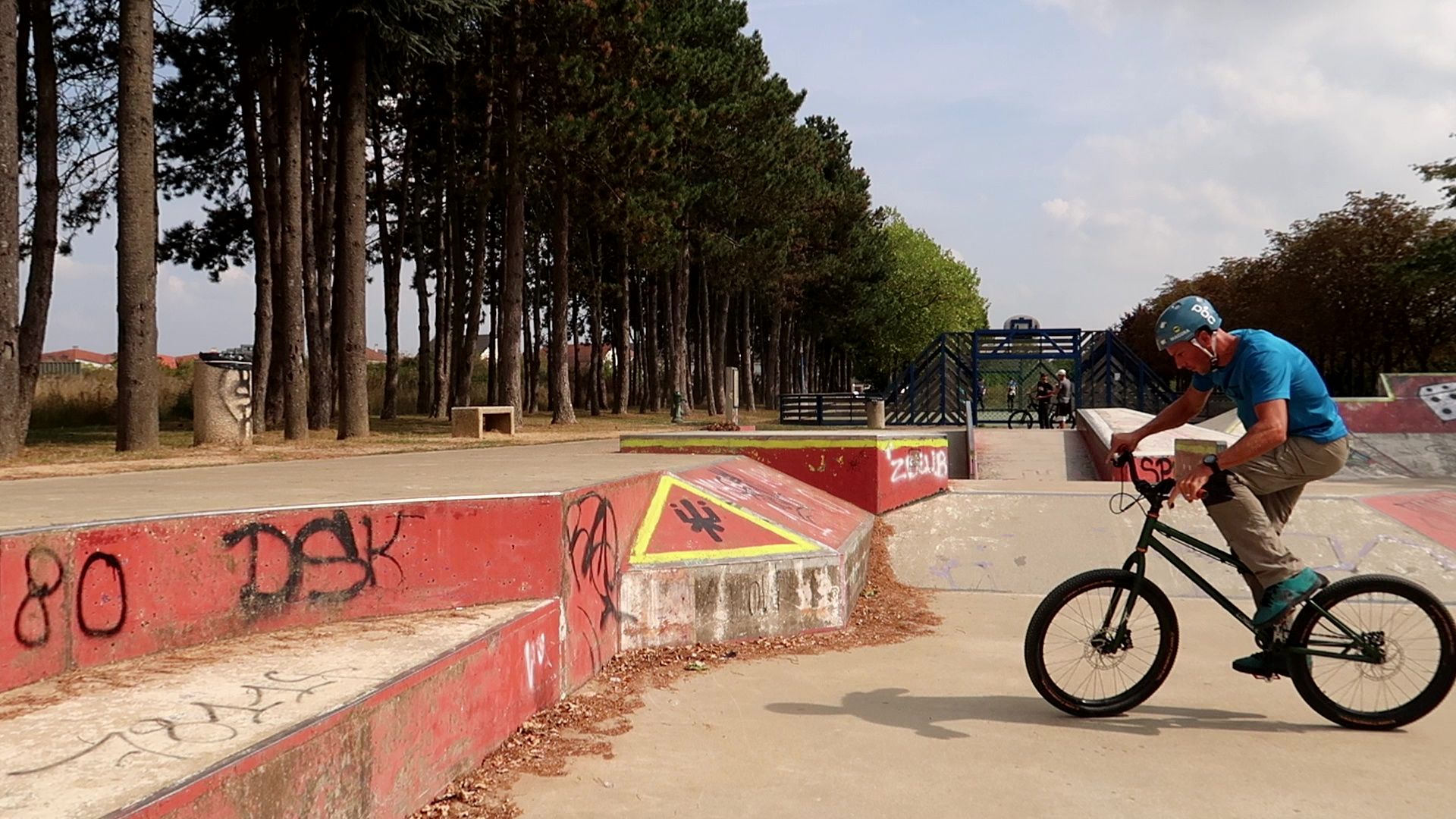 6° As you ride back, give a sharp swing in the handlebars to complete the turn, or terminate with a half cab to keep your flow.

Landing to fakie wheelie
A neat combination with the 180° nose drop is to carry on with a fakie wheelie without letting the front wheel drop to the ground. This will requires a precise backpedalling action right in tune with your backward momentum so as not to stop the move accidentally. Practice makes perfect.